Crete island information, the most well known of the Greek islands.

Crete island information: The Greek language spoken on the island has a distinct Cretan Greek dialect with an extended vocabulary that is Crete-specific. Cretan wine and tsikoudia, a potent distillate, are the traditional drinks. Crete has its own distinctive Mantinades poetry. The island is known for its Mantinades-based music (typically performed with the Cretan lyra and the laouto) and has many indigenous dances, the most noted of which is probably the Pentozali.

Crete island information: Cretan authors have made important contributions to Greek Literature throughout the modern period; major names include Vikentios Kornaros, creator of the 17th century epic romance Erotokritos (Greek Ερωτόκριτος), and in the 20th century Nikos Kazantzakis. In the Renaissance, Crete was the home of the Cretan School of icon painting, which influenced El Greco and through him subsequent European painting.

Crete island information: Cretans are fiercely proud of their island and customs, and men often don elements of their traditional dress in everyday life: knee-high black riding boots, black shirts and black headdress consisting of a fishnet-weave kerchief worn wrapped around the head or draped on the shoulders. Black is the color of mourning, and since Cretan families are notionally considered so extended as to include greatgrandparents or second cousins (although they may have little actual contact) as well as all their respective in-laws, one is theoretically justified to be in continuous mourning for some relative or other, however distant. On festive occasions those who are not in mourning wear white.

Crete island information: The economy of Crete, which was mainly based on farming, and fishing, began to change visibly during the 1970s. While an emphasis remains on farming and stock breeding, due to the climate and terrain of the island, there has been a drop in manufacturing and an observable expansion in its service industries (mainly tourism-related). All three sectors of the Cretan economy (agriculture, processing-packaging, services), are directly connected and interdependent.

Crete island information: The island has a per capita income close to 100% of the Greek average, while unemployment is at approximately 4%, ½ of that of the country overall. As in other regions of Greece, olive growing is also a significant industry; a small amount of citrons are still cultivated on the island. The eastern part of the island is most developed as agriculture region of Crete.

The island has three significant airports, Nikos Kazantzakis at Heraklion, the Daskalogiannis airport at Chania and a smaller one in Sitia. The first two serve international routes, as the main gateways to the island for travellers.

Crete is one of the most popular holiday destinations in Greece. Crete island information

Fifteen percent of all arrivals in Greece come through the city of Heraklion (port and airport), while charter journeys to Heraklion last year made up 20% of all charter flights in Greece. Overall, more than two million tourists visited Crete last year, and this increase in tourism is reflected on the number of hotel beds, rising by 53% in the period between 1986 and 1991, when the rest of Greece saw increases of only 25%. Today, the island’s tourism infrastructure caters to all tastes, including a very wide range of accommodation; the island’s facilities take in large luxury hotels with their complete facilities, swimming pools, sports and recreation, smaller family-owned apartments, camping facilities and others.

Visitors reach the island via two international airports in Heraklion and Chania, or by boat to the main ports of Heraklion, Chania, Rethimno and Agios Nikolaos. Popular tourist attractions include the archaeological sites of the Minoan civilisation, the Venetian old city and port of Chania, the Venetian castle at Rethymno, the gorge of Samaria, the islands of Chrysi, Elafonisi, Gramvousa, and Spinalonga. 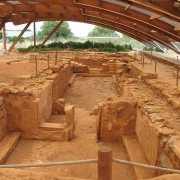 here are a large number of archaeological sites which include the Minoan sites of Knossos and Phaistos, the classical site of Gortys, and the diverse archaeology of Koufonisi, Crete which includes Minoan, Roman and World War II ruins.