Lasithi (Greek: Λασίθι) is the easternmost regional unit on the island of Crete, to the east of Heraklion. Its capital is Agios Nikolaos, the other major towns being Ierapetra, Sitia and Neapoli. The mountains include the Dikte to the west and the Sitia Mountains to the east. The Sea of Crete lies to the north and the Libyan Sea to the south.

To the east of the village of Elounda lies the island of Spinalonga, formerly a Venetian fortress and a leper colony. On the foot of Mount Dikti lies the Lasithi Plateau, famous for its windmills. Vai is well-known for its datepalm forest.

Thanks to stunning beaches and its mild climate year-long, Lasithi attracts many tourists. Mass tourism is served by places like Vai, Agios Nikolaos and the island of Chrissi. More off-beat tourism can be found in villages on the south coast like Myrtos, Makrys Gialos or Makrigialos, Xerokambos and Koutsouras.

Lasithi is home to a number of ancient remains. Vasiliki, Fournou Korifi, Pyrgos, Zakros and Gournia are ruins of Minoan date, Lato and Itanos were Doric towns.

The history of Lasithi can be traced over at least three millennia.[1] The region has considerable ancient history antecedents, including the Dorian era settlement of Olous and Lato.[2] 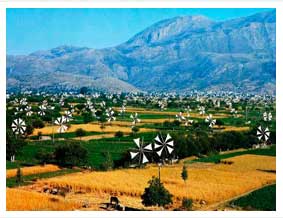 As a part of the 2011 Kallikratis government reform, the regional unit Lasithi was created while Crete was still an autonomous state and was retained after the island joined Greece in 1913. The prefecture had the same territory as the present regional unit, except Viannos area that belonged to Lasithi but was annexed to Heraklion perfecture in 1932. At the same time, the municipalities were reorganised, according to the table below.[3]

The area is well know for it’s windmills, they were used to help farmers produce seeds during the 1900-1970, where the use of maschines was difficult for such productions. The place of birth of God Zeus is on the top of the plateau.

The Dikteon Cave (or Dikteon Andron or Dictaean Cave) is one of the most important and famous of the 3,000 caves in Crete and the 8,500 in Greece.

It is in the impressive Dikteon Cave, rich in stalagmites and stalactites, that Zeus was born according to legend. This is why the Dikteon Cave was already famous in antiquity, dedicated to the worship of the greatest of the gods, as the many offerings found there indicate.

In our days the Dikteon Cave continues to receive many visitors, no longer worshippers, of course, but travellers from all over the world.

Location of the Dikteon Cave

The Dikteon Cave is found in the Mount Dicte range in East Crete, on the Lassithi Plateau.

The Lassithi Plateau was inhabited as early as the Neolithic Period (6000 BC) and is one of the few sites in the Mediterranean where settlements arose at such high altitude (an average of 840 m. above sea level). An important factor was that the Lassithi Plateau has particularly fertile soil, and large amounts of water from the snow that falls on the peaks of mount Dikti collect in the water table.

To visit the Dikteon Cave you need to drive up to the Lassithi Plateau, which is near Neapoli, Malia, Stalida and Hersonissos. It is not far from these as the crow flies, but the road is winding and uphill, so you will need 30 minutes to an hour to reach the Lassithi Plateau and the village of Psychro.