Day trip in Heraklion, The Lions Fountain, also known as Morosini Fountain in the heart of Heraklion, was built in 1628 by General Morosini, during the Venetian Rule in Crete. Francesco Morosini was the local Governor, who wanted to build a monument to commemorate the Venetian Success, driving water to the City Centre.

Day trip in Heraklion-Although the main goal was to create a replica of the famous San Marco Piazza in Venice, the Cretan plaza is of much smaller scale. Nevertheless, there are lions and other mythological creatures and scenes ornamenting the construction. The fountain consists of eight cisterns and depicts different scenes from the vast Greek Mythology: the basin is supported by the sitting lions and the top features Nymphs and Tritons. The water of the fountain comes from an aqueduct situated on Mount Youchtas, almost twenty kilometers away from the Heraklion Airport , via a well appointed and very sophisticated viaduct system. 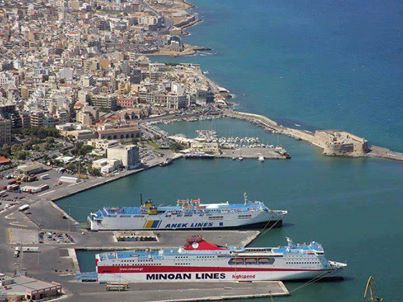 Today the plaza is known with three different names: The Morosini fountain, The Lions Fountain or Eleftherios Venizelos Plaza. In any case it is a major meeting point in the city; a bustling, animated place featuring numerous cafés, restaurants and shops, popular both among tourists and locals.

Day trip in Heraklion, Knossos is a multi-storey building lying at almost six acres of land, which was built between 1700 and 1400BC. Walls were decorated by frescoes and other paintings, adding a sophisticated note to the Palace.The Minoan frescoes portray a non militaristic and advanced society, featuring amazing themes and craftsmanship. One of their main characteristics is the color coding of the genders – men are shown with a ruddy skin while women with the white color that was a symbol of health and purity. In most frescoes both men and women are linked to athletic or other daily activities, such as bull leaping (like the Toreador fights) fishing, and water or flower gathering.The most impressive frescoes are the ones located at the throne room. Although the focal point of the Throne Room is the throne seat made of alabaster, there is a large fresco depicting a Griffin (a lying down griffin).

Day trip in Heraklion, Knossos is today the major archaeological tourist attraction in Crete , visited by thousands of tourists, both Greeks and Foreigners, every year. It is situated in close proximity to the Airport of Heraklion . Although the site remains open from 9am to 8pm, visitors are highly advised to avoid visiting at noon due to high temperatures and large crowds.

On the eve of the 20th century Sir Arthur Evans discovered Knossos, the main Palace of the Minoan Civilization in Crete. Settled upon the area of Heraklion and named after King Minos of Crete, the Palace of Knossos features numerous details of the great Minoan Civilization and is considered to be the largest Bronze Age archaeological site in Crete.

Sir Arthur Evans restored big parts of the palace. Today, visitors can admire and appreciate the amplitude and brilliance of this place.

Knossos is a multi-storey building lying at almost six acres of land. It was built between 1700 and 1400BC. It boasts a very interesting layout, although the original plan cannot be seen anymore, due to destructions and re-buildings: it includes a theatre, large storage rooms, a throne room, baths, courtyards and four main entrances – one on each of the four cardinal sides. It is considered to be a complicated structure; therefore it is completely understandable that it has been associated to the mythological Labyrinth.

Day trip in Heraklion, According to the myth the place was designed by the notorious architect Daedalus, who followed closely the instructions of King Minos. According to the experts the original palace of Knossos featured more than 1300 rooms connected to each other via a complicated network of corridors and hallways.

Minos supposedly imprisoned the architect once the Palace was constructed so as to ensure that he wouldn’t reveal the big secret, which was nothing else but the famed Labyrinth, residence of the mythological monster Minotaur, associated with king Theseus of Athens.

Today, the Palace of Knossos is open to visitors from all over the world. It is the main tourist attraction in Heraklion and one of the major archaeological sites of Greece. Day trip in Heraklion can be organised by any travel agency in any place of Crete.

Day trip in Heraklion, The Heraklion Venetian Harbour as you will probably know it,  is one of the most picturesque settings in the capital city of Crete, offering an ideal spot for those who wish to relax and unwind from the bustling rhythms of the city. It is located at the end of the 25th of August Street and it used to be the main port of Heraklion. Today, as the new Heraklion port operates as trading and commercial hub, the old Venetian port is used by yachts and fishing boats.

Day trip in Heraklion, The history of the Venetian Harbour is long and intriguing, just like the city of Heraklion .

The mole of the harbor starts here; it offers an ideal place for leisurely strolls during summer. Tourists, visitors and locals enjoy the soothing sea breeze and the view to the harbor. The mole is also an excellent fishing spot; you can see amateur fishermen here waiting patiently for a fish all day long. If you feel like fishing, get your fishing rod or pole and get here. You can start a conversation with locals who will be more than glad to tell you stories about the Fortress and its history.

The Venetian Harbour of Heraklion is particularly nice in the evening hours, and offers the chance for a romantic and intimate stroll.

Day trip in Heraklion, You can walk along the sea wall that starts from Koules and runs two kilometers into the sea; do not miss sitting for a nice coffee at the ‘Marina’ café opposite from Koules and enjoy a nice glass of ouzo and seafood tidbits at the tavernas around the harbor.

Just right from the Sea Wall there is a lovely pedestrian area offering nice views to the sea; you can stroll admiring the view or take a few pictures from this equally picturesque angle. This strolling path is called Bedenaki by the people of Heraklion, which stands for ‘Little Wall’. Across the road there are tavernas in abundance; their tables spread out on the pedestrian area and they are a popular place to sit and enjoy tidbits with ouzo or raki along with other locals and tourists.