Apokoronas (Greek: Αποκόρωνας) is a municipality and a former province in Chania regional unit, north-west Crete, Greece. It is situated on the north coast of Crete, east of Chania. The seat of the municipality is the village Vryses

Apokoronas extends from the foothills of the White Mountains north to the coast, in a wide plain with rolling hills. To the east, Cape Drapanon rises above the plain and extends out into the Sea of Crete. The area is very green and fertile, unusual for rocky Crete.

The Kiliaris river of Apokoronas, known in antiquity as ‘Pyknos’, runs through the region. Robert Pashley suggested that the name ‘Apokoronas’ came from the ancient city of Ippokoronas or Ippokoronion, also cited by Strabo. This city may have been located near modern Nipos, or on the site of the Venetian fortress, Castel Apicorono, on an outcrop between Kalyves and Almyrida.

The major towns of Apokoronas are Vamos, Armenoi and Vryses, with police, municipal and utility offices as well as taverns and large churches; Kalyves, Almyrida and Georgioupoli are the largest beach resorts. Tourism and agriculture are the major local industries, with much construction and quarrying to satisfy the demands of many foreigners eager to buy or rent properties in what used to be beautiful and traditional villages. Gavalohori is among the more popular villages for foreign buyers, with a large amount of often low-quality building taking place. Many residents or workers in Chania also have homes in the area.

Apokoronas was the location of much of the filming of the movie Zorba the Greek. The municipality of Apokoronas was formed at the 2011 local government reform by the merger of the following 6 former municipalities, that became municipal units:

The district of Apokoronas in the north-eastern corner of the Chania prefecture and at the foot of the White Mountains is one of the greenest regions of Crete and contains some interesting sights, such as Lake Kournas, the island’s only freshwater lake, picturesque villages and small beach resorts.

The ruins of ancient Aptera are located on a hill above the bay of Souda of Apokoronas. Founded in the 7th century BC, Aptera was one of the largest city states in Crete and was continuously inhabited until an earthquake destroyed it in the 7th century AD.

A monastery was established there in the 12th century. Apokoronas Most of this very large site has not been excavated yet but you can see impressive Roman cistern, a Greek temple, various other buildings and massive defensive walls. At the north-western end there is a Turkish fortress with superb views of Souda bay.

The archaeological site of Aptera is open Tuesday to Sunday from 8 am to 2.30 pm and entrance is free.

Kalyves, Almyrida and Plaka are the most visited villages of Apokoronas district: 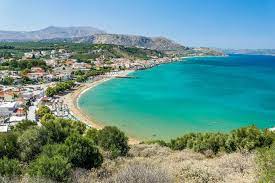 Kalyves is a large village  located in the Souda bay, with nice clean sandy beach, one of the most beautiful villages of Apokoronas.

The village is traditional and is a fish port place with taverns and local shops.

Almyrida is well known village and place many British have chosen to buy land and a new home. It is a good destination for families with young children, top place for those who want to «isolate» from overcrowded areas.

Plaka is a small village, offers stunning views of the Souda bay and the White Mountains.

Georgioupolis is the first village from the eastern of the district of Apokoronas, fishing village with a 9km long sandy beach and a massive development in tourism industry. This area hosts some of the mos important hotels in west of Crete, there are places to stay with private beach and amenities of a high standard!

Lake Kournas is 3 km south of Georgioupolis, the greatest lake of Crete. The lake is surrounded from mountains, the scenery is breathtaking. There are taverns and souvenir shops around the east side of the lake and water activities, such as water bicycle-diving etc.

Vrysses (or Vrises) is a new built village in 1925. It is across the road driving from north side to the south, Sfakia region.

Vamos is the capital of the district of Apokoronas.

Vamos village is located in Chania prefecture West of Crete, north of ‘The White Mountains’, estimate a distance of  25 km far from the city of Chania. The village is one of the oldest in the area and played important role during the past years and mostly last century.

The city of Rethymno is only 35 km and the capital city of Crete Heraklion is 135 km. Vamos is a village by the beginning of a mountain built. The hight level is 300m above the sea. Heraklion airport is 133km far and Chania airport just 44km distance.

There are many hotels in all these areas to stay and spend fantastic vacation. The most of the villas owned around are rent places with swimming pool and garden. A rental car is needed to explore all these fantastic destinations!