Cretan wedding is considered a holly tradition that stays immutable throughout the centuries on the island. It is rightly considered, like baptism, the most important ceremony!

Usually the weddings are scheduled from the season of Summer to Fall , due to the blooming of the season and for the reason that there is time and intention for the preparations ! It is a time-honored tradition . 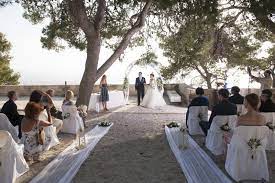 There is a variety of preparations that can last up to several months to be completed!

Of course , many of the traditional elements of Cretan wedding have differentiated and continue to exist in relation to some others , but it is generally considered that the tradition continues to leave its mark on every wedding on the island !

By some slight differences there is the ‘Traditional Wedding’ , which is the old version of Cretan wedding and there is the ‘Modern Wedding ‘ , which more flexibly adapts other influences to this party.

In general the Cretan wedding is divided into two main parts. First the holy sacrament is performed in the church, with all the relatives and friends of the couple in attendance (of course the couples too!) and then they all head together to the celebration area.

The party (glendi as said in Greek) is a way of thanking the newlyweds to all the attendees who came to celebrate this happy event with them. 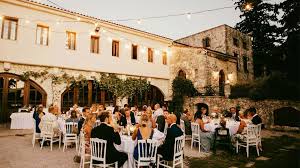 The celebration of the mystery is done by the decision of the couple as to where it will take place, but one of the two may have made a donation to a saint, in which case it is done where the donation is.

In the church, the guests and relatives of the couple gather first to make some preparations, such as setting up the bench with the sweet dishes and of course the bubbly, a kind of decorated gift to the guests. Finally, the groom follows, accompanied by his friends and relatives to wait for the bride in the traditional way. The bride descends accompanied by her friends and relatives, with a route from her father’s house to the church, in a tradition known as the psiki .

When the time of the orthodox sacrament comes, certain movements are made by the future spouses, the priest and the priests:

It is a very symbolic act and full of sanctity, so that those present feel the symbolism and sacredness of this moment.

First, the priest receives the wreaths from the Gospel and after crossing them three times on the head of the groom, as a sign of respect to the Holy Trinity, the same procedure is followed for the bride. Thus in this order the bridesmaid crowns them three times.

CRETAN WEDDING: The “Keramama”, also known as the feast of the Cretan wedding, is an integral part of the success and completion of the wedding. Of course, there is no authentic Cretan feast without the musical accompaniment of the lyre, the lute, the violins, the ascomadoures and much more.

Traditionally, the tables are already set with dry cakes, honey, a variety of cheeses with olives, wine and sweet bread rolls. Salad and ntacos are a must, kalitsounia with grass and cheese, snails and dolmades are also on the main course. The internationally known wedding plate is the main dish of every wedding. Finally, various sweet dishes are served, as well as the wedding cake. Usually, Cretan macaroni and gruyere is served at dawn, although this has now become the main course.

After all the guests have gathered, there is a spectacular entrance of the couple combined with a dance in the center of everyone. Immediately after the dedications and the speech of the newlyweds, the traditional dances follow and continue until the end.

The party always starts and ends with mantinades, and there will certainly be many mantinades during the party.

Cretan customs are essential for the successful completion of the wedding.

The “calling”, where all relatives, friends and neighbors are invited. In the period between now and the wedding day, relatives and friends send gifts, the so-called “kaniskia” which is a basket with oil, cheese, wine and potatoes. On the eve, everyone helps the “procurers” to transport the bride’s gifts to the groom’s house, which are loaded onto decorated horses followed by the procession of relatives and friends, while ballads and melodic Cretan mantinades are played.

The engagement, a tradition that has been passed down through the ages, is essentially the account of the two future couples. It is the starting point of a beautiful journey with your other half as your companion. The engagement is the prelude to a unique marriage. It’s to ask for the hand of the bride, to arrange the wedding.

Usually white cloths are laid out and beautiful trays of confetti and an icon are placed on top. When the groom arrives, he will place the box of rings on the tray as tradition says. The best man is the one who will pass the rings on the left side to the two members of the couple.  The rings will remain there until the wedding day. The decoration for engagement rings on the table can be completed until additional vases of flowers and bouquets (small, cute, handmade gifts) are placed on the table.

CRETAN WEDDING The pre-wedding is also a traditional party, a few days before the wedding. The groom invites his friends to celebrate his last days of freedom. It is usually held in the groom’s village, but the bride can also have a pre-wedding in her own village.

The white sari, worn either on the neck, on the head or even as a tie, is a tradition that has been going on for many years.