The Holy Monastery of Agios Georgios Gorgolainis is located at an altitude of 500 meters near the village of Kato Asites, where it belongs, and it was the one that survived more than the rest of the monasteries in the area, during the various revolutions during the Turkish occupation.

Monastery Agios Georgios – Gorgolainis: The current church of the monastery is two-aisled dedicated to Agios Georgios and Agios Nikolaos. Its bell tower belongs to the beginning of the 20th century. Inside it has an elaborate wood-carved iconostasis. Although the temple is very old, the surrounding cells of the monks are newer, mainly from a renovation in 1957. Due to the sloping ground, the buildings are developed on three levels.

Monastery Agios Georgios – Gorgolainis: On the highest level we find newer buildings, such as the mansion, guesthouses and the great temple of Agios Arsenios of Cappadocia. Also impressive is the Venetian fountain on the middle level, in which there was a magnificent marble lion until 1990, when it was stolen. On the lowest level is the abbot’s office. 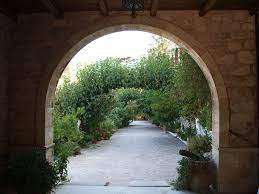 Monastery Agios Georgios – Gorgolainis: As the small monastic community insists on not using microphones and electric lighting in the church, services and vespers here preserve the authenticity of the past. Worth mentioning is the old wood-carved iconostasis, a work of popular ecclesiastical wood-carving from the 19th century while the old cells have been replaced, as the children’s camp of the Holy Archdiocese of Crete operated in the monastery for years during the 1960s. In 1966, almost all of the monastery’s property was distributed to the villagers, of which only a few pieces remained around it.

Monastery Agios Georgios – Gorgolainis: The old inhabitants of Asites used to say that in the past there was a church, Agios Nikolaos, on the site of the monastery. The name of the monastery came from a story. It is said that there was a man in the church one night and he was very thirsty. At one point he saw a horseman in front of him and gave him water. And then after drinking water he asked him who he was and the horseman answered Saint George. Because of this incident, meaning the water went to him very quick, he was named Agios Georgios Gorgolaini.

In the precincts of the monastery, one can see the bust of the brave chieftain Fragias Mastrachas, who was killed by the Turks at the age of 75, in 1868 in a battle in Asites village. Also, in the fountain of the monastery there was a marble lion, from the time of the Venetian occupation, but it was stolen in 1990. It is even said that the name Gorgolaini comes from the rapid filling of the latrines.

Huge oak trees covering a large part of the grounds (two of these trees, the sycamore and the cypress, have been declared “preservable monuments of nature”). In 2001, 1 person was registered in the Monastery. The monastery was renovated in 1950.

Gorgolaini played an important role in stimulating the religious and national sentiment of the Assitians and not only during the period of the Turkish occupation. It is an important monastery that has existed at least since the years of the Venetian occupation. The oldest mention of it dates back to the 13th century. Its founder is said to be archpriest Silvestros. The catholicon is dedicated to Saint George whose church was completed in 1627.

During the period of the Turkish occupation, it was a center of revolutionary movements due to its location and was set on fire by the Turks. In August 1822, a battle took place in the monastery between 5,000 rebels and 22,000 Turks. In 1830 it was rebuilt by the abbot Methodios and the monk Neophytos. In 1866, an assembly of revolutionaries was convened there by Michael Korakas. The Turks were informed of the event and launched an attack, but were repulsed by the rebels and fled. In 1867, after a bloody battle, the fighters were defeated and Korakas was forced to leave the monastery. During that period, the chief Mastrachas was also killed.

Asites village is a place you can visit all year round, it is very close to Heraklion city, place where beautiful surroundings attract visitors. Hiring a car is the best way to travel to the place, visit the village and of course the Monastery Agios Georgios – Gorgolainis,