Monasteries, places where men and women decide to spend the rest of their life in beautiful Crete! 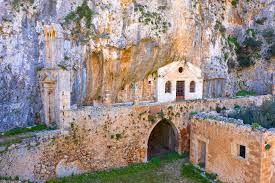 The decision to leave your home and “sacrifice” the rest of your life for God and stay in a Monastery! Greek people believe in Jesus Christ, they are Christian Orthodox religious people. There are numerous Monasteries across the island. The city of Heraklion has some close by the city and some other Monasteries in far places, where you can drive with a rental car.

Monastery of Panagia, Eisodion Theotokou is located on the way to Rodia village, just 2km before arriving to Rodia. The Monastery is open for all guests who want to visit and pray or just visit the place. The whole building was given as present from a woman who used to be living there, Maria Sbokou, whose grave is in front of the church.

Monastery of Panagia is hosting women, just women, who work all day to make their living. They  have to wake up early morning to pray, after they do house works and work for their living.

Monastery of Pantanassa is located infront of the Port Pantanassa, west of Heraklion, in Malevizi Municipality. It is a Monastery for women. The place is in a very easy area to find. There are many who visit the Monastery every Sunday. This place is ideal for ceremonies. 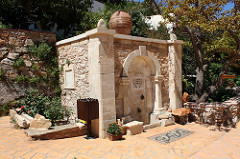 Monastery Savathiana is located on the top of Mountain Vasiliko. The place is majestic. The way to reach the place is pass through Rodia Village and keep on driving up hill to the top, estimate it is minutes far from Rodia village. The place is huge, there are just women living in the Monastery. They do work to make their living. They grow chickens, goats, lamps, pigs and have very big gardens with vegetables. It is not very close to drive by car.

Odigitria monastery. The monastery of Odigitria is one of the most famous monasteries of southern Crete. It is reached via the village Sivas, just between Moires city and Matala village. The road is paved and runs through Asterousia hills, olive trees and olive groves are all around the area.

Monastery Odigitrias was founded in the 14th century, although in 1393 it was mentioned in the books of  Chandakas (Heraklion city). A visitor can realize at a glance of how many historical and valuable paintings can be seen. The Monastery had to defend against attacks by pirates and barbarians, over the centuries. The monastery of Odigitria became major place with great role for the resistance against the Ottoman occupation and ruler of Crete in the 17th century. Xopateras was a priest who resisted against the Turks and faught with. During World War II, the monastery was destroyed by the Germans.

In the monastery there is a loom, a mill, agricultural implements and other objects. Also, there is a traditional oven. If you are in Odigitria and like hiking, south of the monastery is the gorge Agiofarago. This gorge is a good walk finishing on the shore . In the gorge, there is the church of Agios (St) Antonios, a place where many monks stayed previously, to hide themselves from Turks or Germans.

Moni of Saint George Gorgolainis is located at an altitude of 480m, very close to the village of Asites, 22km south of Heraklion city. The Monastery is built at a lush green area with huge trees, cypress and oak.

Moni of Saint George Gorgolainis is one of the oldest in Crete. It was a place that many fights and several attacks took place during the Turkish occupation, as it hosted Greek rebels. Some of them were the chiefs or Captains like Michael Korakas and Fragias Mastrachas, two very famous heroes throughout Crete. Inside the monastery you will see the statue and the tomb of Mastrachas, killed in 1868 while fighting against the Turks in Asites village.

The monastery reserves the authenticity of the past, as the monks do not use electrical equipment during liturgy. The temple is dedicated to Saint George and is equipped with an artful iconostasis. Despite the fact that the temple is very old, the surrounding monks’ cells are quite new. You will get impressed with the old Venetian fountain, which till 1990 was equipped with an imposing marble lion, which was then stolen.

Keras Kardiotissas Moni or simply Keras Monastery (Greek: Μονή Κεράς Καρδιώτισσας or Μονή Κεράς) is an Eastern Orthodox monastery dedicated to Virgin Mary that is situated near the village of Kera of the Heraklion regional unit in Crete, Greece. It is built on the north slopes of Mt. Dikti, at an altitude of 650 m and a location that is approximately 50 km east of Heraklion, next to the road to Lasithi Plateau.

Moni of Agia Irini is located 25km south of Heraklion and 3km west of Kroussonas village, at an altitude of 630m.
It is among the oldest and most prospering monasteries in Crete and very well preserved by the nuns.

The two-aisled church of the monastery is dedicated to St. Irene and the Assumption and is celebrated on May 5 and August 15 respectively.
It is believed it was built at the end of the Venetian Era and belonged to a Catholic feudal family.

In the years of the Ottoman occupation the monastery had developed considerable social activity and functioned as a hideout for the rebels against the Turks.
In 1822, after they had destroyed the village of Kroussonas, the Turks slaughtered all the monks of the monastery.
Its restoration started in 1936 by priest Demetrios Fasoulakis and in 1944 the monastery reoperates as a nunnery.

Moni Panagia Palianis is considered one of the oldest monasteries in Crete, it is located at an altitude of 280 meters, near Venerato village. A nunnery monastery, its name is linked to the name ‘old monastery.’ During the Ottoman period, it was destroyed by the Turks and the nuns were massacred; but it quickly regained its power. Besides, Koimisi tis Theotokou (Virgin Mary) which is dedicated to the Treis Ierarchs, and to Agios (St.) Panteleimon.

Monastery museum holds holy relics, pictures and books of great historical and archaeological value. In the courtyard of the monastery is Agia Mirtia, a perennial tree hidden inside which it is believed that there is an icon of Panagia (Virgin Mary), and is considered miraculous. The monastery is open to the public.

Moni of St. George Epanosifis is located 30km south of Heraklion, near Metaxohori village. It is the largest male monastery in Crete (in monk number). The spiritual and social contribution of the monastery during the difficult years of Turkish occupation was invaluable, many men were killed against the Turkish occupation..

In the monastery there are now precious heirlooms, gospels, carved crosses, a silver chalice of 1842, the icon of Saint George monastery of Xera Xyla and relics of 21 Saints. The monastery also houses a Higher Ecclesiastical School, in a building that was formerly an orphanage. Lastly, the church of St George celebrates on April 23 and November 3.

Monastery Koudoumas of the Virgin Mary lies to the west of the Aspes or Martelos headland, hidden, partly built inside a cave, has been successfully renovated.

Moni Koudouma is a virgin area of Crete. You can visit it either from Kapetaniana or from Sternes village. From Kapetaniana you may walk (or drive if you have a genuine 4×4 car) down to Agios Ioannis (2 hrs). When you get to the village, ask them to show you the way to Agios Ioannis church; it is a church built inside a cave and there are some spectacular wall-paintings

From the village you may follow the path to Koudoumas Monastery (1hr 30 min). Thirty minutes before the monastery there is the cave of Agios Antonios with a church built inside.

From Koudoumas you may either return the same way or walk up the road (it is the road coming from Sternes) to Mt Kofinas and Kapetaniana (about 4 -5 hrs). This road is much better than the road from Kapetaniana to Agios Ioannis but still in need for a proper 4wd vehicle. It is a really scenic route as the road is steeply descending from 1000 m to sea-level, through woods of pine trees.

Another approach to Moni Koudouma is driving from Kapetaniana to Mt Kofinas and then turn the first turn right. If you go this way then you may reach Agios Ioannis by feet. Another great place is Psili Ammos; it is described in the naturism section of the site.