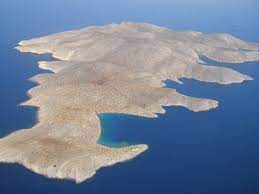 Dia island is located opposite Crete island, 6.5miles far from the coast of Hersonisos, where it belongs.

Dia island is an uninhabited island, 5km long. In the south coast of Dia there are four coves, which are (from west to east) Agios Georgios, Kapari, Panagia (Madonna) and Agrielia. One more cove, that of Aginara, is to the east.

The Dia island was formerly known as Stondia, by juncture loss in the phrase στoν Δία (Greek for on Dia).

It was the principal port of Crete for centuries, as ancient times was one of the most important ports. Its four south coves have been used as anchorages since the Minoan period. There are numerous of shipwreck around the island, as well many amphoreas.

The islet looks like a giant lizard when viewed from the city of Heraklion. Greek mythology tells of a giant lizard that tried to destroy the island of Crete, however, Zeus turned it into stone with a thunderbolt, thus creating the island. There are still people who believe this story.

Dias God (Zeus) while being in Olympus mountain looked at his mother land Crete, place he was born, and saw the Cretans killing with arrows the goats-he remembered their mother Amalthia was feeding him when he was a baby and was hiding himself from his father Kronos in the cave of Diktaion Andron. He was so angry that decided to throw a lizard to kill the Cretans, then a huge monster got our of the sea to kill humans. The other Gods tried to change his mind, but didnot manage it.

Poseidon, the God of the sea, came out and said Father how can you kill all Cretans? Is this the wright way to thank them for protecting you from Kronos when you were a baby?

Donot you remember them making noise in order your father Kronos will not hear your cry, as a baby? then Dias decided to throw bread in to the sea, the monster went to eat it and with a lizard he made it a stone, then created Dia island and Paximadi island and Petalidi island too

The island is visible from Crete’s capital city of Heraklion, as it would have been in the time of the Minoans, from Knossos. Because of this, it was sometimes identified as the island that Theseus escaped to after killing the Minotaur with Ariadne. Minoans tried to find them but they were very well hided in Dia island caves

On Dia island there are a number of protected wildlife species including the snail Albinaria retusa, the lizard Podarcis erchardii schiebeli, the wild rabbit Oryctolagus cuniculus cnossius, and Eleonora’s falcon, known as mavropetritis in Greek. Dia is part of the European Network of Nature (Natura) 2000 and is a protected hunting ground. There are also a number of protected plants such as Carlina diae.

In 1976, Jacques Cousteau carried out underwater exploration around Dia and found the remains of an ancient port in the waters between Heraklion and Dia. The ship wreck was a ship sent from France to help Cretan people fight the Turks, 17th century, it was shot and exploded 24 June 1669.

Jacques Cousteau found a shipwreck of Minoans-as remains of ancient amphorae on the north side of Dia island.

How to sail there

There are many small boats sailing there from Heraklion port or Hersonisos port or Pantanasa port of Malevizi. The sail is between 30-45minutes duration and the round of the island approximate 1hour. 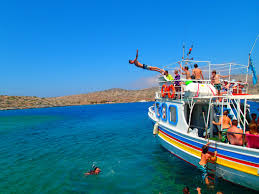 When sailing to Dia island, snorkeling equipment for cool scuba dive is possible. You can do fishing, the waters are ideal to do so. Generally, you can find place to camp and stay some days, as soon as you will respect the Natura 2000 island. 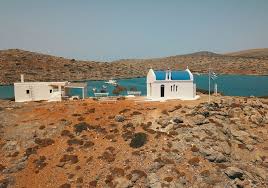 Lack of ubiquitous crowds of tourists. On vacation, the noise of the hotel, embankments and the beach often bother. Sailing on a yacht is designed in such a way to avoid crowded places of tourists.

You can celebrate special occasions such as birthdays or anniversaries while on board one of our yachts and admire the magnificent sunset.

Furthermore, i recommend you spend one day in Dia island!